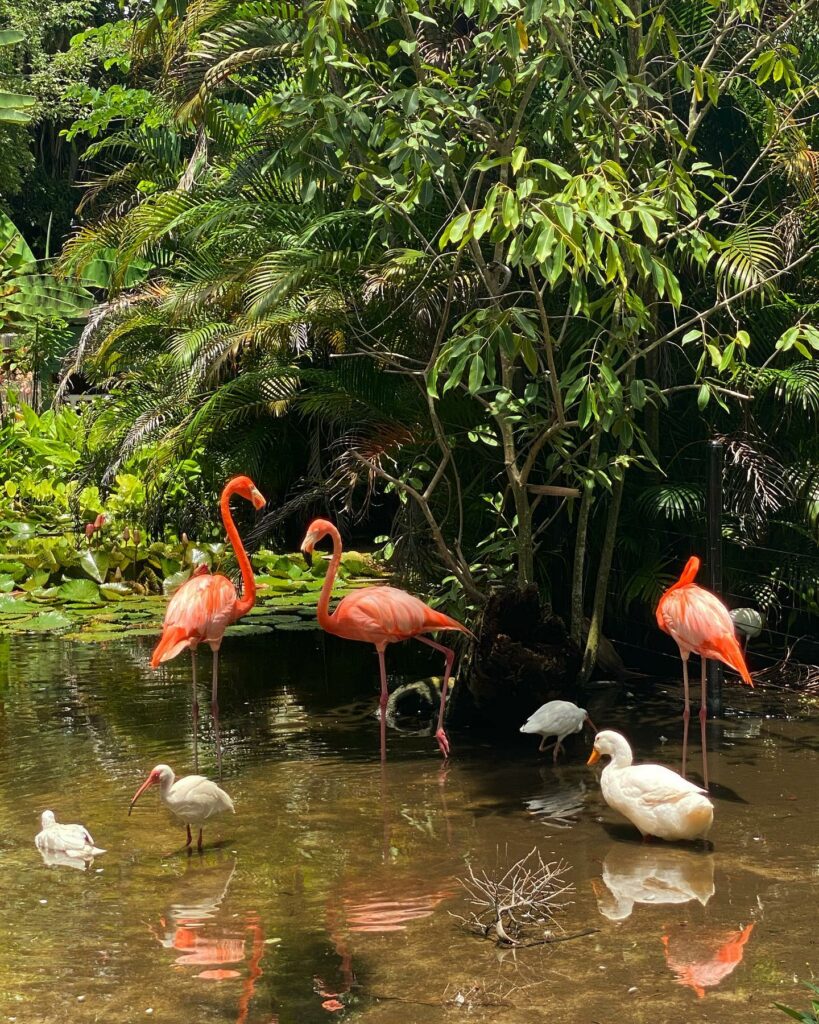 About the American Flamingo

The American flamingo is a large species of flamingo closely related to the greater flamingo and Chilean flamingo. Along with the greater flamingo, it has the longest legs relative to its body size of all birds. The bill bends characteristically downward, and at the base it is pale yellow, in the middle it is pink to orange, and the tip is black. Their plumage is deep pink/red/orange and they are the brightest in plumage of all flamingo species. The young birds are gray in color, their feathers slowly turning pink as they mature.

The American flamingo inhabits South America’s north coast, the Yucatan Peninsula in Mexico, and some of the Caribbean islands. It is the only flamingo that is native to North America. It lives in a wide variety of freshwater and saline habitats such as lagoons, estuaries, coastal and inland lakes, and mudflats. 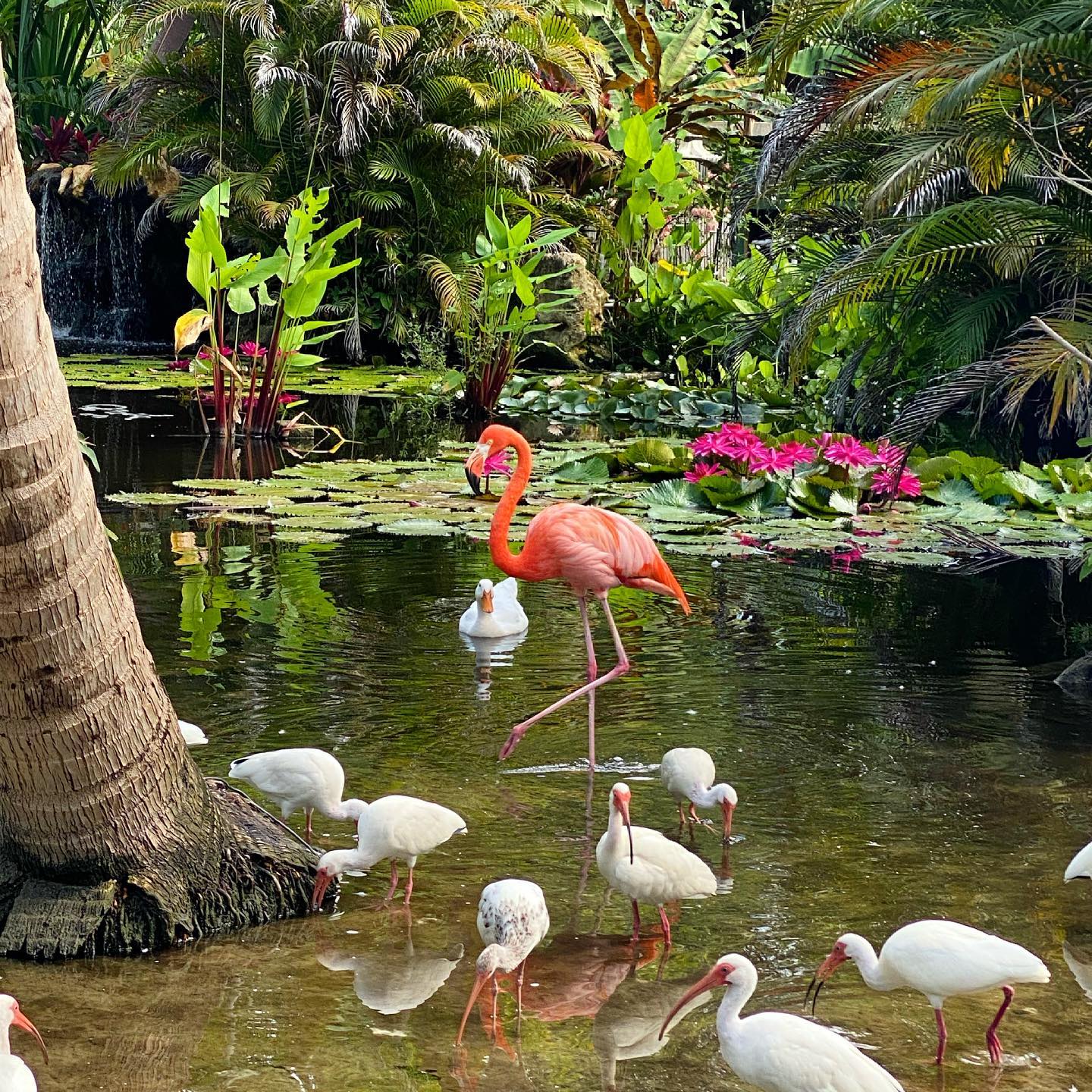 Flamingos live, feed, and breed in large flocks, which may number thousands of individuals. When mating and interacting with others in the colony, they use highly ritualized displays. Most of the day American flamingos spend feeding. They are shy and fly away if disturbed. Both adults and juveniles spend most of their time feeding, preening, and resting. Each individual becomes aggressively territorial when foraging for food. A bird claims a “territory” and doesn’t allow others to come nearby. If one does come too close, the bird that has been offended will exhibit threatening displays in warning, so that the intruder will leave. A colony establishes distinct areas where the birds can freely interact, the drinking area being one such place. The American flamingo is very nomadic, and travels hundreds of kilometers, depending on the availability of resources.

American flamingos eat mainly brine, shrimps, mollusks, but also marine worms, insects, and algae. Flamingos eat in an amusing manner. They position their beaks in the water upside down and suck water into them. They then pump the water out of the sides of their beaks. Tiny animals and plants remain to provide a tasty meal. 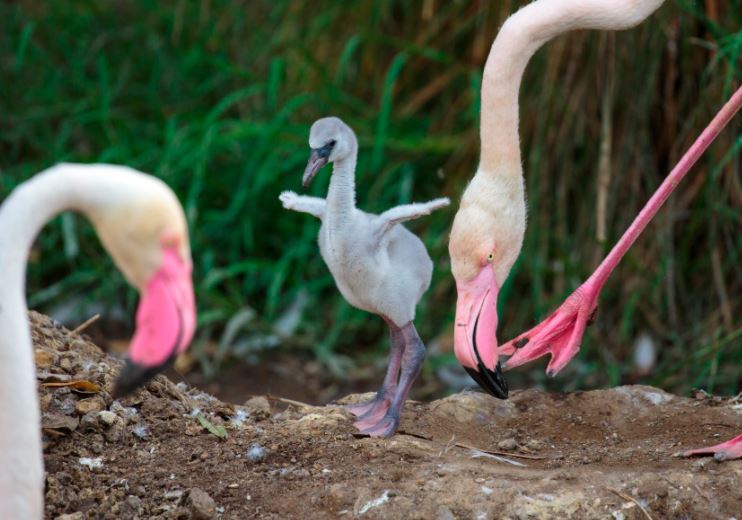 American flamingos are monogamous, with strong, long-term pair bonds. They engage in group courtship displays, thousands of birds turning their heads, bowing their necks, or raising their wings in spectacular synchrony. These displays make sure that the colony members are all ready for mating at the same time. These birds mate after the rainy season, typically in spring or summer. The parents both build the nest. Usually, just one egg is laid and is incubated by the male and the female for 27 to 31 days. Both parents feed the chick, with the typical “crop milk” that is secreted in the adults’ upper digestive tract. The chick is brooded for about 5-15 days, and then it gathers with other chicks in large crèches which several adults look after. It fledges at about 70-75 days old and becomes reproductively mature when it is 3-5 years old.

How Many Flamingos are There? 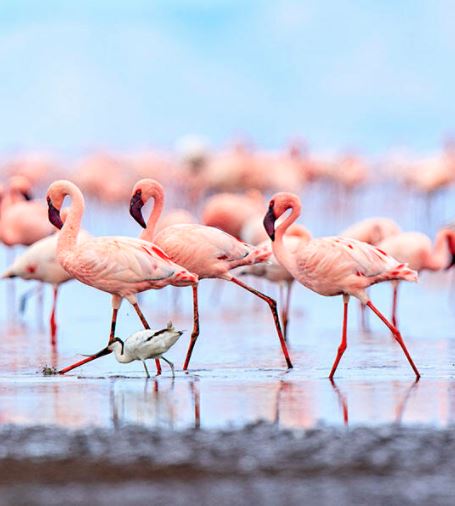 American flamingos are threatened with human disturbance and habitat loss along the Caribbean’s coastal wetlands.

IUCN Red List estimates the number of mature individuals to be around 260,000-330,000 birds. Overall, the numbers of this species are increasing today, and it is classified as least concern (LC).

American flamingos eat large amounts of crustaceans, aquatic invertebrates, and algae, and so have a big impact on these populations.