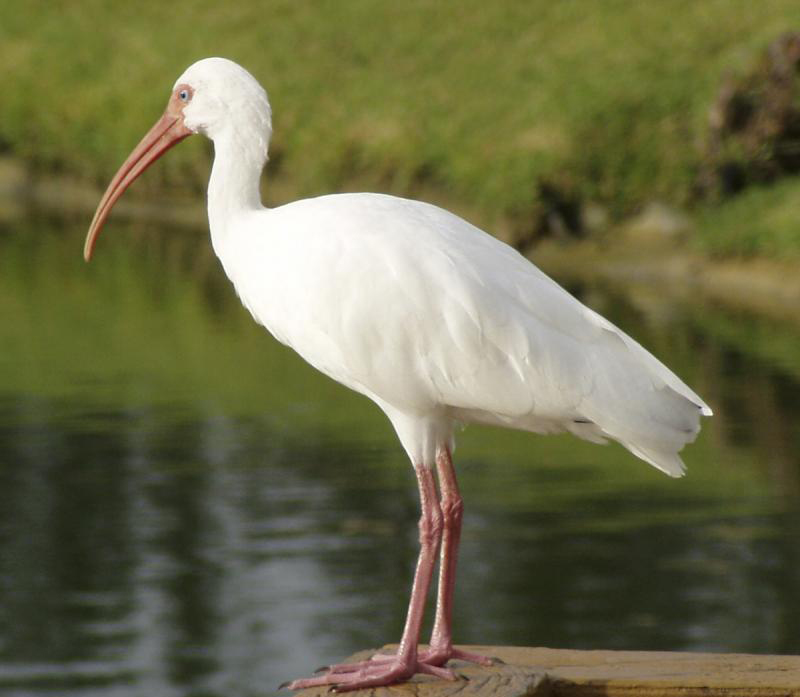 About the American White Ibis

The American white ibis is a medium-sized wading bird with white plumage and pink facial skin. Adults have black wingtips that are usually only visible in flight. In non-breeding conditions, the long downcurved bill and long legs of these birds are bright red-orange. During the first ten days of the breeding season, the skin darkens to a deep pink on the bill and an almost purple-tinted red on the legs. It then fades to a paler pink, and the tip of the bill becomes blackish. The males and the females of this species look similar but males are significantly larger and heavier than females and have longer and stouter bills.

American white ibises breed along the Gulf and Atlantic Coast, and the coasts of Mexico and Central America. Outside the breeding period, the range of these birds extends further inland in North America and also includes the Caribbean. They are also found along the northwestern South American coastline in Colombia and Venezuela. American white ibises live in a variety of habitats, although shallow coastal marshes, wetlands, and mangrove swamps are preferred. They also frequent muddy pools, on mudflats, and even wet lawns. Populations that are away from the coast and shoreline, particularly in southern Florida, often reside in marshes, ponds, and flooded fields. In summer, these move to more coastal and estuarine habitats as inland waterways become flooded with summer rains and ibises find the water levels too deep to forage effectively. 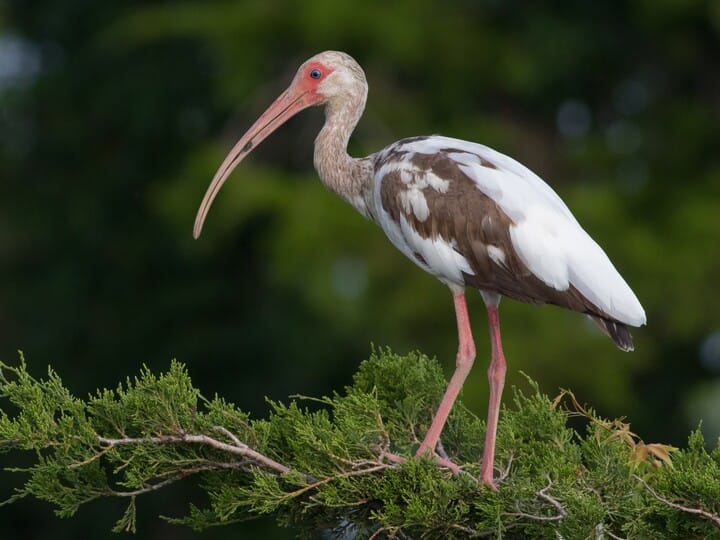 American white ibises are gregarious birds, however, they are territorial and defend the nesting and display sites against intruders. When threatened or defending a territory American white ibises perform displays that include lunging forward with the bill in a horizontal posture, and standing upright, and snapping the bill opposite another bird engaging in the same display. Birds also lunge and bite, often holding onto an opponent’s head or wings. American white ibises are active during the day and for the most part, they forage for food by tactile probing. They wade slowly through shallow water and stick their long, downcurved bill into the substrate of the water body and sweep it back and forth across the bottom to pick out suitable food items. Birds may also probe when standing still. Groping with a wide open bill is a technique used by ibis in deeper water when alone, as is head swinging, in which the ibis swings its wide open bill widely in open water. On land, American white ibises locate prey by sight and pecks and do not have to insert their bill into the substrate. When not feeding the birds spend their time flying, resting, roosting, and attending to their nests. Much of the time roosting is spent preening, biting, and working their feathers with their long bills, as well as rubbing the oil glands on the sides of their heads on back plumage. Before preening ibises often bathe; they squat in water 5-20 cm (2-7.9 in) deep and flick water over themselves with each wing in succession. Hundreds of birds may also bathe together around the time of courtship.

American white ibises are carnivores (piscivores, insectivores). Their diet consists primarily of small aquatic prey, such as insects and small fishes. Crayfish are their preferred food in most regions, but the birds can adjust their diet according to the habitat and prey abundance. 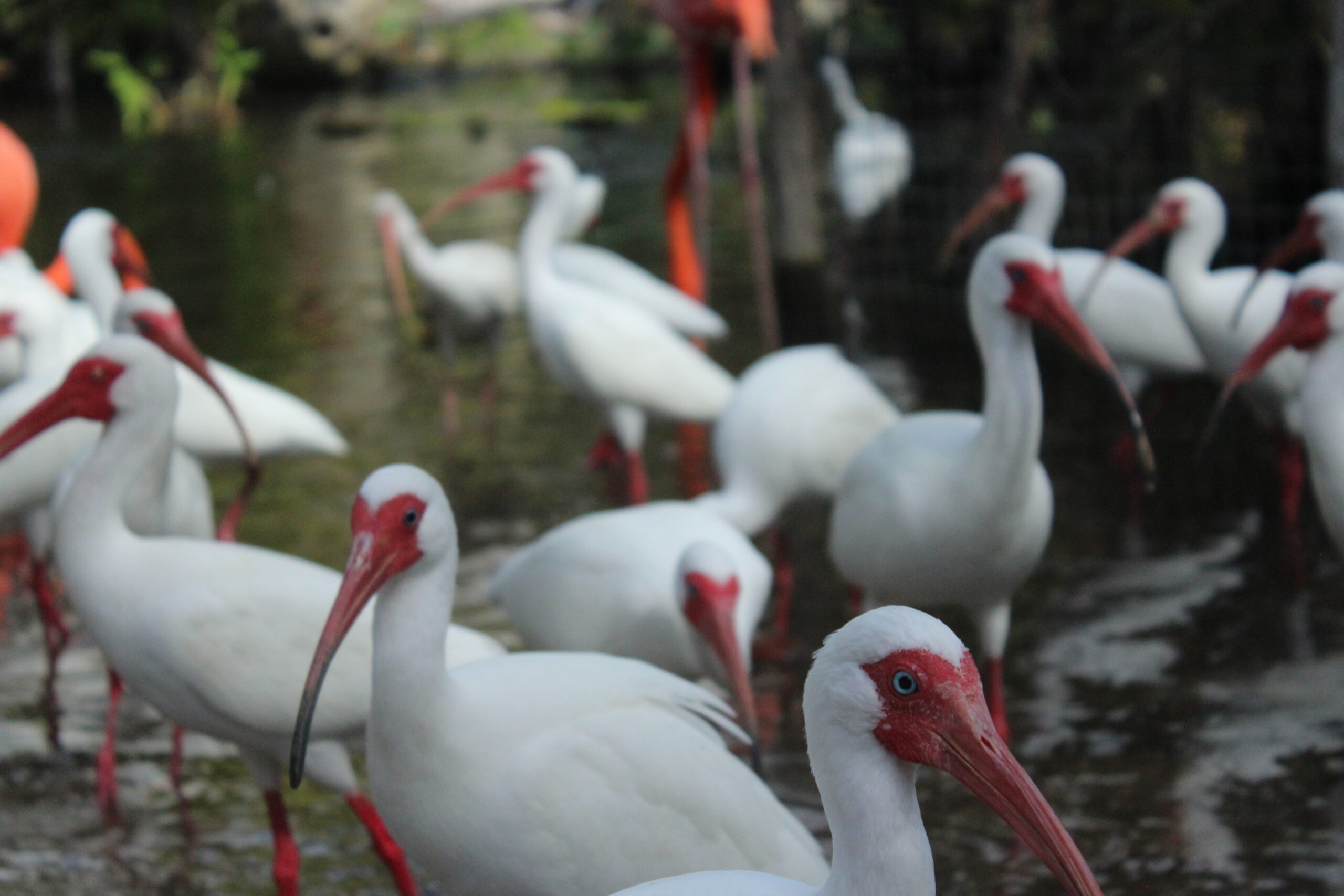 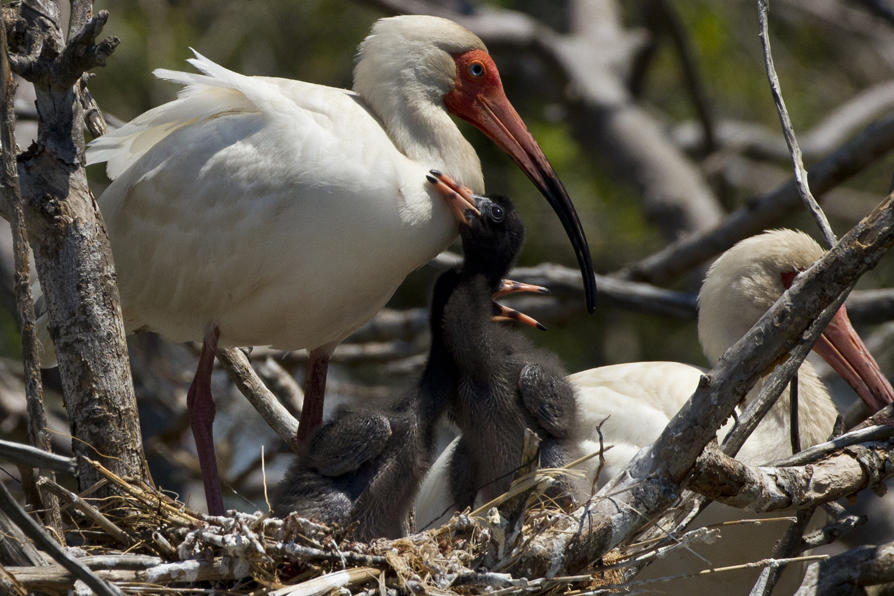 American white ibises are monogamous and pair up in spring. They breed in huge colonies, often with other waterbird species. Nesting begins as soon as suitable foraging and nesting habitat is available. The female selects the site, usually in the branches of a tree or shrub, which is often over water and builds the nest; the male assists by bringing nest material. The female then lays anywhere from 1 to 5 eggs which hatch after about 3 weeks; the chicks are altricial (helpless) and attended by both parents. The male is present around the nest for most of the day, and the female most of the night. The parents exchange nest duties in the morning and in the evening. The young fledge at about 28-35 days after hatching and become independent at the age of 7 weeks. American white ibises become reproductively mature and begin breeding in their third summer.

How Many American White Ibis are There? 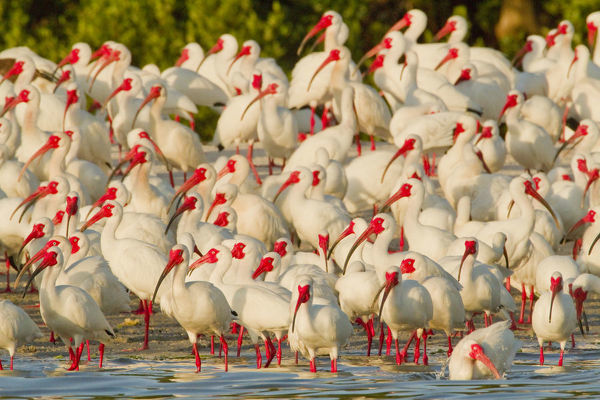 White ibises suffer from loss of nesting and feeding habitat, human disturbances, and pollution of wetlands. This all affects the birds’ breeding success and survival.