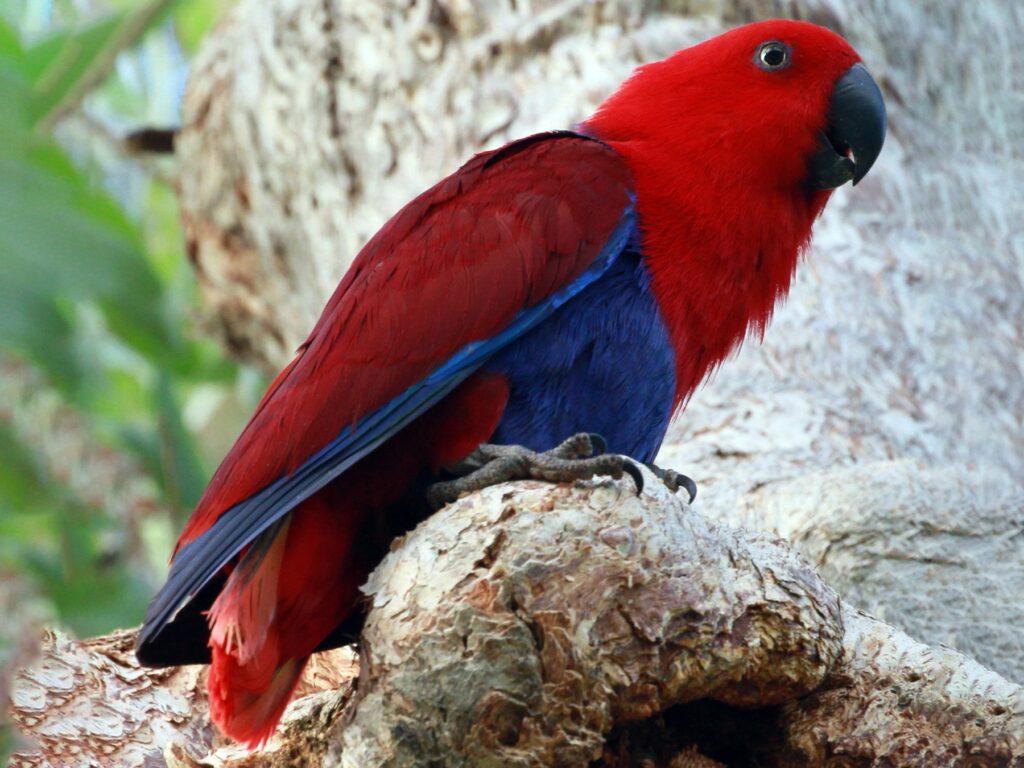 About the Eclectus Parrot

The Eclectus parrot is unusual in the parrot family for its extreme difference of the colors of the plumage between the male and the female; the male having a mostly bright emerald green plumage and the female a mostly bright red and purple/blue plumage. Large populations of this parrot remain, and they are sometimes considered pests for eating fruit off trees. Their bright feathers are also used by native tribespeople in New Guinea as decorations.

Eclectus parrots are native to the Solomon Islands, Sumba, New Guinea and nearby islands, northeastern Australia, and the Maluku Islands (Moluccas). They live in forests, often near water or coastal areas, and often occur in savanna woodland, mangroves, freshwater swamp, plantations, and rural gardens. 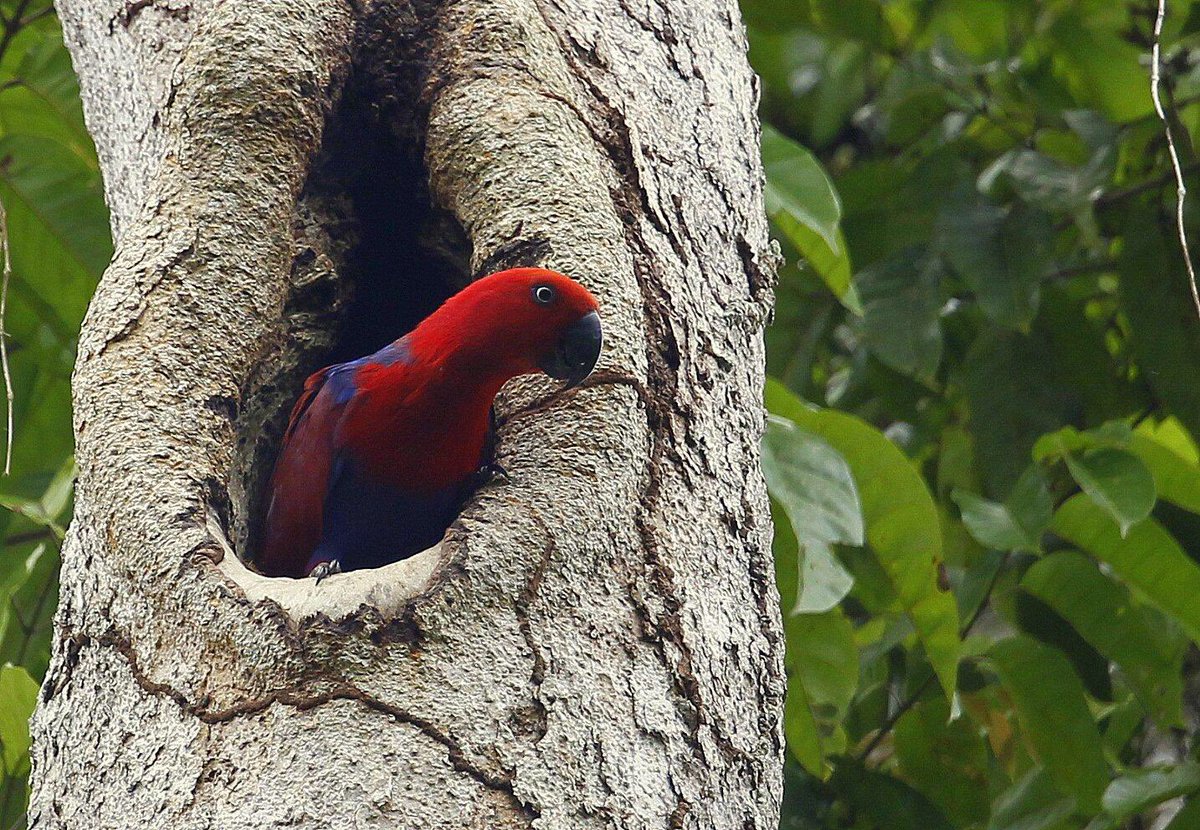 Eclectus parrots are shy and secretive birds. They are active during the day spending most of their time collecting food, eating, and resting. They live in pairs or small flocks and at night roost in groups. These parrots are quite noisy. They make a screeching flight call, chuckling, and bell-like sounds; when feeding they keep in contact with each other using a ‘chu-wee’ sound. Eclectus parrots have an interesting adaptation that is connected with the difference of the colors of the plumage between the sexes. The female must remain conspicuous at the entry to the nest hole (to advertise her presence at her hollow to males and rival females), but well hidden when in the depths of the nest, because the red color hides her well in the darkness. The brilliant green color of the male helps him remain hidden amongst the trees whilst foraging. However, the plumage of both sexes appears spectacular when viewed in the ultraviolet spectrum, an ability that predators such as hawks and owls lack. 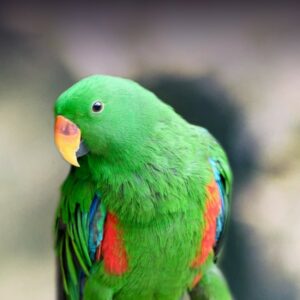 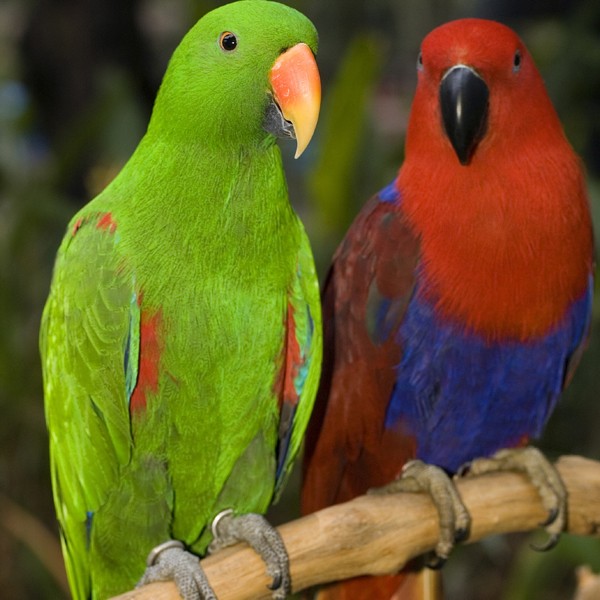 Unlike other parrot species, Eclectus parrots are polygynandrous (promiscuous); females may mate with multiple male suitors, and males may travel from nesting site to nesting site to mate with multiple females. Pairs nest within hollows in large, emergent trees. Suitable hollows are at a premium and the female vigorously defends her chosen nesting site from other females, remaining resident at ‘her tree’ for up to 11 months of the year, rarely straying from the entrance to her hollow and relying on multiple males to feed her via regurgitation. Males may travel up to 20 km to forage and up to five males will regularly provide food for each female, each competing with the others for her affections and the right to father her young. The female lays 2 white eggs and incubates them for 28-30 days. Young fledge at about 11 weeks and become reproductively mature between 2 and 3 years of age.

How Many Eclectus Parrots are There? 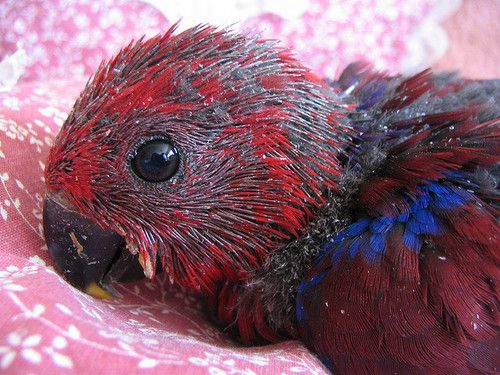 Eclectus parrots are one of the more popular birds kept in captivity and thus are often hunted and trapped for trade. They also suffer from deforestation and loss of habitat.

According to the IUCN Red List, the total population size of the Eclectus parrot is 7,300-51,000 mature individuals. Currently, this species is classified as Least Concern (LC) on the IUCN Red List but its numbers today are decreasing.